So at this year’s AGM, we took action and introduced a new rule that states that any plotter who spots blight on their potato crop needs to immediately take action.   Potato blight on the allotments is becoming a big problem and although blight itself  is driven by the weather, because there are so many potatoes getting grown in the allotments, once one crop is infected, it rapidly spreads to others.

The pictures below show the before and after effects of blight in the space of only 7 days this year.  First photo was taken on 30th July – the second only 7 days later the following weekend.   In the space of one week you go from having a perfectly healthy crop and the next week your crop is decimated. 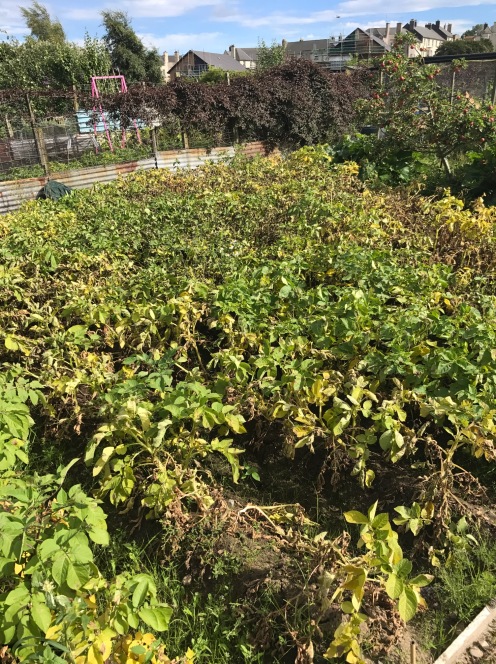 So this is all very well, but a lot of our plotters who are just starting out growing veg have no idea what blight is and what to look out for.    Here is a quick guide for all you plotters out there.

So what is potato blight?   Here is a close up of the potato leaves and infected tubers.  It is easy to spot and identify – a brown spot that first appears on the leaves and then spreads to the stalks. 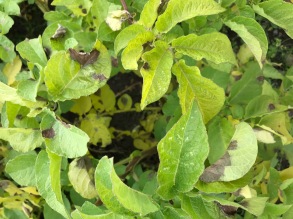 The initial symptom of blight on potatoes is a rapidly spreading, watery rot of leaves which soon collapse, shrivel and turn brown. During humid conditions, a fine white fungal growth may be seen around the edge of the lesions on the underside of the leaves.

Here is what the Royal Horticultural Society say about blight and how is is transmitted.

The late blight pathogen is a microscopic, fungus-like organism whose sporangia (spore-bearing structures) easily break away from infected foliage and may be wind-blown for long distances. The actual infective spores are released from the sporangia into water and need to swim in a water film before settling on the plant surface and penetrating into leaf tissues; this is why the disease is so serious in wet summers. The pathogen then spreads rapidly, killing the cells. Under humid conditions, stalks bearing sporangia grow from freshly killed tissues and the disease can spread rapidly through the crop.

The pathogen overwinters in rotten potatoes left in the ground or by the sides of fields. However, the great majority of infections in gardens arise from wind-blown sporangia originating in other gardens, allotments and commercial crops. In the UK, outbreaks may occur from June onwards, usually earliest in the South West.

The presence of new strains in the UK means that the pathogen now has the potential to produce resting spores (oospores) in the affected plant tissues. The oospores are released from the rotting tissues to contaminate the soil. These resting spores have yet to be found in the UK, however, and little is currently known about their survival and their potential as a source of the disease. The investigations into oospores are continuing and more information may be available in a few years.

Late attacks of blight defoliate potato crops, but if the disease arrives after the tubers are set and they are harvested before they become infected, little is lost. However early attacks can also be devastating and blight is the most important commercial disease of potatoes. Outdoor tomatoes are at high risk of infection if the weather is suitable. The disease is less of a problem under glass as the spores have to find their way into the glasshouse through doors and vents. If, however, blight establishes in a glasshouse the high humidity inside usually leads to very rapid development of symptoms.

So that’s the official line on the biology of blight and you can see why it is important to follow some simple guidelines to minimise the chances of it re-occurring every year or infecting your neighbour’s plot.    Currently, there is no fungicide available to gardeners for spraying onto potato plants like what they use on farms and the potato fields.

Here is what you must do if you see early signs of blight:

Hopefully this helps us all control an ever increasing and frustrating problem that results in potatoes having to lifted too early and as a result, not being very big.

Hopefully you now understand blight a bit better and you are armed with the information for next year to get on top of blight early.

View all posts by Heathryfold Allotments